First off, let’s be clear, the Bear Valley Pemmican Bar is not actually made of Pemmican.  Pemmican is a preparation method for preserving meat that is essentially a concentrated mixture of fat and protein originally developed by native North Americans (you can read more on Wikipedia). I would say an Epic bar is much closer to actual Pemmican. The Bear Valley Pemmican Bar is made from traditional energy bar ingredients: malted corn and barley, nonfat milk, honey, wheat germ, raisins, walnuts, non-gmo soy flour, soy oil, wheat bran, grape juice, pecans, lecithin, and vinegar. I don’t see any meat in that list… Why Bear Valley decided to call this a Pemmican Bar I have no idea – seems like a sketchy advertising move to me.

I might be able to ignore my annoyance with Bear Valley and their false advertising if this product tasted like heaven. They do not. The most accurate way I can describe the taste of one of these is to think about juicing and all that fibrous leftover stuff you get after extracting all the juice out of your vegetables. If you took all that stuff and compacted it into a very dense brick I’d imagine that would taste similar to these bars. 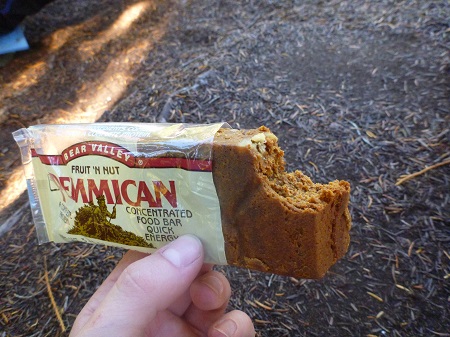 I was only able to eat another to choke down a couple bites before I donated the remains of this bar to the local squirrel population.

If you can choke down one of these things they are at least nutritious. With 400+ calories (depending on the flavor) and 16 grams of protein they provide a lot of energy to get your through the day – think of them along the lines of a meal replacement.

I will not be trying a Bear Valley Pemmican Bar again.