The Hummingbird Hammock Single Person Hammock was originally a Kickstarter project that I’ve been following with anticipation for a while.  Recently they began taking orders on their website and I handed over my credit card with great anticipation.  The reason for my excitement is that the Hummingbird Hammock Single Person Hammock is made out of very lightweight materials and has a stated weight of 5.2 oz. and supports up to 300 lbs.  This is light enough that you can throw it into your pack and not feel guilty in the slightest. 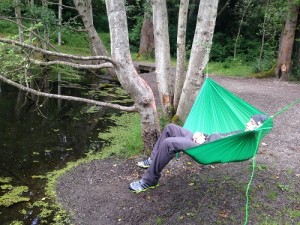 Nothing beats the comfort of a hammock after hiking.

The Hummingbird Hammock Single Person Hammock was able to shed weight by using materials designed for parachutes.  You hear the term parachute hammock thrown around all the time but in this case they really mean it.  Not only is the material very lightweight but also very strong so you don’t need to worry about it giving way underneath you.  It also packs up very small – about the size of an orange – when it is stowed into its attached stuff sack.  I recently took it on a day hike to test it out and was very pleased.  Its comfortable and has a hassle free setup.  Many lightweight hammocks don’t extend the base fabric all the way to the end and instead opt to use either a series of cords or netting to bring the hammock to a point which can become frustratingly tangled.  Hummingbird Hammock’s chose to go with a single sheet of fabric gathered at the end, a much less complicated setup.

This is a fantastic hammock and I am excited to use it further but it isn’t a hammock for everyone.  I am 5′ 7″ tall and feel that I fit perfectly with either using the hammock like a lounge chair or lying down in it but if you are pushing 6′ you might want to consider a longer hammock (or maybe contact Hummingbird and see if they could make you a longer one?).  There are also a few small annoyances I’ve found with this hammock.  First is the attached stuff sack.  Most hammocks with attached stuff sacks position them so that you can use the stuff sack as a pocket while the hammock is in use.  Hummingbird put the stuff sack opening at the wrong end – hopefully this is fixed in future versions.

Secondly, I’ve used this hammock twice now and I’m already starting to see some of the stitching coming undone around the edge of the stuff sack.  While this isn’t a huge deal and not hard to fix it is something I’ll need to address in short order as it appears to be getting worse quickly.  I expect better craftsmanship from a boutique hammock maker that sells a $75 hammock.

UPDATE: As you can see in the comments below Hummingbird has addressed the stuff sack being “upside down” issue that bugged me.  Its a great sign when a company can make changes to their products in such a timely fashion! Nice work Hummingbird!