The MicroMo is Jetboil’s latest entry into their line of cooking systems. The big selling point of the MicroMo is that it utilizes the same fuel regulator as the MiniMo (allowing for great simmer control) but it’s jammed into a much smaller and lighter stove. Want to cook food in a Jetboil while you are deep in the woods? This stove is for you.

The MicroMo occupies the top tier of Jetboil’s line of 0.8 L (capacity) / 12 oz cooking systems (weight). For the premium price demanded by the MicroMo you get the ability to cook “real” food. When I first started backpacking I didn’t think there was anything more delicious than a pouch of Mountain House Chili Mac. As I’ve spent many more nights in the backcountry I’ve begun to yearn for real food – something cooked rather than just re-hydrated. Unfortunately my Jetboil Sol TI just couldn’t do that. One of the big issues was flame control. Jetboils had, essentially, two options – off and maximum power! This didn’t allow you to cook as the full force flame would cause food to burn and stick to the bottom the pot which would inturn overheat the pot damaging the delicate fins that enable the amazing heat spreading efficiency that Jetboil’s are known for. With the introduction of the MiniMo Jetboil solved one of big problems their cooking systems have faced. The new fuel regulator included on the MiniMo allows for much more precise flame control. This fancy new fuel regular has made it’s way down the Jetboil product line to land in the new MicroMo and I couldn’t be happier.

To test the MicroMo I cooked two meals – breakfast and dinner (typically what I use my Jetboil for on the trail). For breakfast I made coffee and a hard boiled egg, cheddar cheese stick and bacon pita breakfast sandwich.  I brought 2 eggs to a rolling boil then turned the stove off and let the eggs sit in the hot water for an additional 15 minutes. They turned out perfect. After mashing the eggs with my spork, stuffing them into a pita and adding the cheese and bacon I had one of the most desirable trail meals I’ve ever eaten. 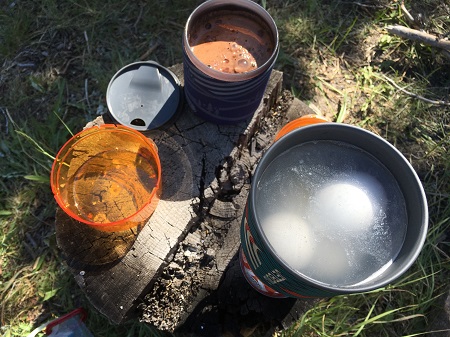 Just cooking some hard boiled eggs in my Jetboil MicroMo. NBD. Also, if you are wondering what’s in my GSI Outdoors mug its a combo: 1 Starbucks Via packet + 1 packet of hot coco = backcountry moca.

Side Note: Yes, I know that hard boiled eggs are an unusual trail meal but trust me you want to give it a try. Uncooked fresh eggs will last a few days under typical conditions. I guarantee that when you are eating a hot, delicious, breakfast sandwich and sipping on your coffee 60 miles deep into the backcountry while everyone else eats oatmeal for the 4th day in a row you will be threatened. If you want to know if the raw eggs you are packing are safe to eat just fill up your Jetboil with water and place your egg inside. If the egg sinks to the bottom you know it’s good to eat. Floating eggs are bad eggs. You can buy small packs of pre-cooked bacon that don’t require refrigeration at most grocery stores. Also, picking up a couple mayo packets to mix into the eggs adds a nice touch. Even if you don’t go all out on the pita sandwich hard boiled eggs alone are still totally worth it and way less hassle. 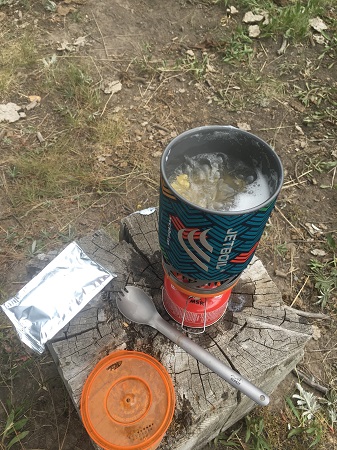 Love that simmer feature. No stuck noodles on the bottom of that pot as long as you give it an occasional stir.

For dinner a box of Mac and Cheese was on the menu. I prepared the noodles as the box suggested – bring the water to a boil, dump in the noodles and then turn down the heat until the water is just boiling and cover for a few minutes stirring occasionally. After the noodles were ready I drained them (thanks to the built in strainer on the Jetboil’s lid), added the cheese packet and some chopped up summer sausage to create a delightful hot meal that would have been perfectly at home on my dinner table. When I was done eating I rinsed out my MicroMo and was pleasantly surprised that not a single noodle had stuck to the bottom of the pot – that is a sign of proper flame control.

Rarely does backcountry food both look and taste good. Backcountry Mac and Cheese does both and hits the spot.

Testing out the Jetboil MicroMo proved to be one of the most delicious tests I’ve ever conducted and Jetboil’s newest cooking system performed extremely well. I was blown away by the ability to actually cook delicious meals using a Jetboil stove that weighs a mere 12 oz.

The Jetboil MicroMo is my new stove of choice for any situation where I’m planning on cooking for 1 to 2 people.