I’ve always discounted Jetboil’s because of their weight.  While my friends sing their praises I have always laughed and innocently asked how much their packs weigh.  The Jetboil Sol Ti Premium Cooking System aims to stifle my argument that, while a Jetboil works well, its just too heavy for me. At an advertised weight of 8.6 oz., 4 season capabilities, and the legendary efficiency and boil times of a Jetboil the Sol Titanium appears to be a solid contender in the domain of lightweight backpacking.

There are many things about the Jetboil Sol Titanium cooking system that don’t disappoint.  Primarily the efficiency and boil times I got with this stove.  I was able to boil 16 oz. of cold water outside on a blustery day in 2 minutes 21 seconds using only 4.5 grams of fuel.  That was pretty unreal to see.  I was curious so I ran the test again using my personal favorite backcountry stove and pot (the Snowpeak Litemax and Evernew Ti Pasta Pot M which weighs 6.2 oz. combined) and got a boil time 3 minutes 24 seconds and 14 grams of fuel used – a minute longer with more than three times the fuel burned. 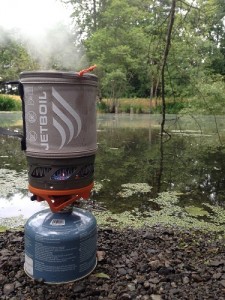 Besides this stove’s burn times and efficiency I loved the dead simple setup and its ease of use.  Hook the fuel canister into the stove, attach the pot, poor in water, turn knob, click igniter, and, after two and a half minutes, drink my coffee. The skeptical might think this seems like an identical set of steps to what you do when using a traditional stove – trust me this is different.  I thought the same thing, then I tried a Jetboil and hands down thing is foolproof.

There are some things that bug me about this stove.  The first is that the claimed weight is 8.6 oz. but when I put it on my scale I get a weight of 9.1 oz.  This is for the pot, stove, measuring cup, lid, and neoprene insulation sleeve (I left out the measuring cup and fuel stabilizer since on the label Jetboil specifically says they don’t include them in the stated weight). 9.1 oz. is not the same as 8.6 oz. Each component has the following weight: 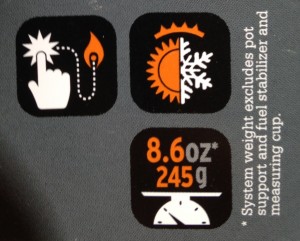 The packaging which lists the weight of 8.6 oz.

I can’t find any combination of items that equal 8.6 oz. It really frustrates me when manufacturers make up item weights.

Other major issues I have with the Jetboil Sol Titanium are the delicacy of this stove and the size of the pot.  The fins on the bottom of the pot are very fragile.  Scorch the bottom of the pot even a little trying to melt snow and you will melt off the fins. Sure Jetboil warns you not to do this and to ONLY boil water in your stove but why tout the 4 season capabilities if you can’t melt snow. Also,the pot holds a MAX of 27 oz.  Realistically you can fill it up to about 24 oz.  This is not enough volume for the water needed to cook two freeze-dried dinners simultaneously.  I like to go backpacking with people.  A slightly bigger pot that could accommodate two people would have been nice. 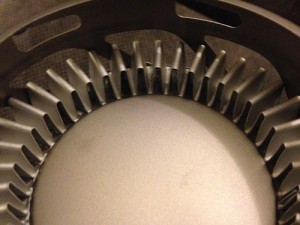 You can see there is very little attaching the fins to the bottom of the stove.

Smaller annoyances include the stupid insulation sleeve.  The pot is too hot to touch (either the sleeve or the handle) when the water inside it is boiling.  Would it kill Jetboil to attach a couple titanium wire, fold out handles on this thing rather than use that stupid strap handle? The lid is also terrible.  Its plastic, has a bunch of holes in it for straining noodles and such which let out heat (even though it clearly says to ONLY boil water in this stove) and the stupid thing is too hot to take off if there is boiling water inside.  I would prefer a simple titanium lid common on pretty much every other titanium pot.

One thing to note is that you can solve the problem of not being able to remove the lid by tying on a bit of very thing cord. 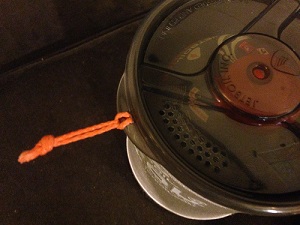 You can see the little bit of cord I tied on to help remove a hot lid.

The thing about this stove though is that even with both my irritation at its weight being far above the advertised and the number of things I don’t like about its performance up the Jetboil Sol Titanium’s fuel efficiency is second to none.  One 100g fuel canister will last 2 people for 3 nights.  The best stove and pot combination I’ve found, an Evernew Ti Pasta Pot M and Snowpeak Litemax, require one 100g fuel canister and one 230g fuel canister to allow 2 people to spend 3 nights in the woods.

You do the math and the gross weight of each setup including fuel is telling.  The Jetboil’s total weight is 16.1 oz.  The more traditional stove setup’s total weight is 25.6 oz.  It’s amazing how much fuel efficiency matters.

The Jetboil Sol Titanium is annoying but its fuel efficiency makes it worth using for 3 season backpacking if all you are planning on doing is rehydrating food.

UPDATE: After using this cooking system for awhile I can’t emphasize enough the delicacy of this stove.  When Jetboil says to ONLY boil water in this stove they mean it.  The fin welds on my stove are showing signs of disintegration due to my own experimentation trying to cook more than just water.

UPDATE: It appears Jetboil no longer manufactures this product.