The Klymit Inertia O Zone Sleeping Pad has a lofty goal – reduce a sleeping pad to the minimum weight possible by reducing material in areas that you don’t need it through a process they call “body mapping”.  In principle this sounds great. On paper the Klymit Inertia O Zone Sleeping Pad weighs a measly 12.2 oz., has a built in pillow, and claims to be rather warm due to the fact that your sleeping bag can loft through the holes rather than compress everywhere like a traditional sleeping pad.  Sounds awesome! I’ve always thought sleeping pads weigh more than they should.  If you can get a 25 degree (F) sleeping bag to weigh 1 lb. 5 oz. should you be able to get a sleeping pad to weigh less than a pound.  The industry leader in air filled, lightweight sleeping pads is the Therm-a-Rest NeoAir XLite Sleeping Pad.  It comes in at 12 oz. but, in my opinion, isn’t very comfortable due to the use of horizontal air chambers.  Hopefully testing the Klymit Inertia O Zone Sleeping Pad proves there is another option for those of us looking to shed some weight.

I’m sorry to say that I was less than impressed with the Klymit Inertia O Zone Sleeping Pad.  While a great idea in theory this pad just doesn’t work for me.  There are a number of annoyances that, if this pad was more comfortable, I could work around.  Things like this pad not laying flat (you can see how it kind of twerks itself when its fully inflated in the picture below) and the inflation valves being difficult to use are super irritating (the valves kind of click into place rather than use a traditional screw closure).  The main problem though is that I always sink through to the ground, no matter how much I inflate it.  Particularly my hips – doesn’t matter how I position myself on this sleeping pad my butt is hitting the ground and getting cold.  I weigh around 160 lbs. so by no means should I be too heavy for this pad. 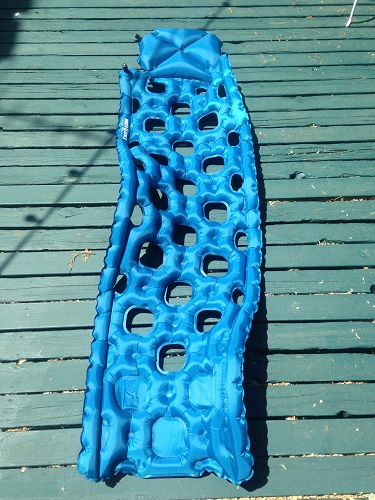 Testing the Klymit Inertia O Zone sleeping pad on my back deck. Notice how it twists when fully inflated?

There is one feature I do like about this pad – the pillow.  Its awesome! The “self centering” feature provided by the 4 triangle shaped air chambers really works nicely to keep my head on the pillow.  I also like that they used separate air chambers for the pillow and the sleeping pad, allowing you to have different inflation levels for each piece (I like my inflatable pillows to be slightly on the under-inflated side while I prefer my sleeping pad to be as firm as possible). I might look into the standalone pillow Klymit sells specifically because I enjoyed this pillow so much.

I love the idea Klymit had with the Inertia O Zone Sleeping Pad. Unfortunately it just isn’t executed quite right.  I’m going to continue trying the subsequent versions Klymit produces because I feel like with a little bit of refinement this has the potential to be the perfect sleeping pad.  But, in its current state, I’d say pass for now.