I’ve been using the Big Agnes Q-Core SL sleeping pad for several months now and I’m very happy with it.  While not the lightest sleeping pad on the market I really value a couple different features that are specific to this pad.  The first is the “quilted” baffles used in this sleeping pad.  I don’t like sleeping pads with horizontal baffles – when I lay on them it redistributes air inside the pad and puts pressure on my lower back causing pain when I wake up. I also am not a fan of vertical baffles – when using a sleeping pad with vertical baffles I tend to slide off the bottom end as I move around throughout the night and end up half way off the pad by morning.  The Q-Core solves this problem by using a vertical baffle system that is “stitched” in a way that it adds, for lack of a better term, traction.  This keeps me on the sleeping pad all night long and doesn’t cause my lower back any discomfort.

The second feature of the Big Agnes Q-Core SL sleeping pad that I really appreciate is the high R-Value it sports while still staying relatively lightweight – it has an R-Value of 4.5 and a claimed weight of 16oz.  Other similar sleeping pads, that weigh somewhere in the 12 oz. to 24 oz. range, have R-Values of 1.3 to 3.1.  No one else comes close to an R-Value of 4.5.  When I’m hammock camping in the summer or camping on top of snow in the winter this is awesome.  Everyone else I backpack with needs to bring an inflatable sleeping pad as well as a foam sleeping pad to hit the same R-Value as my Big Agnes Q-Core SL. 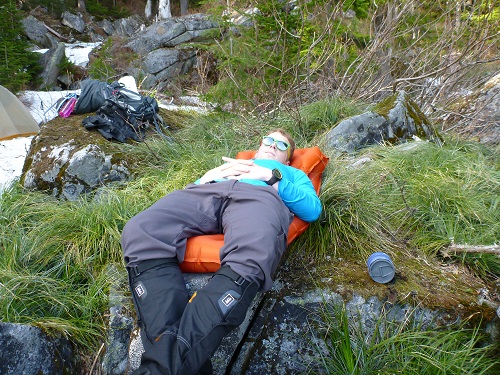 Taking a load off after a long day hiking. The Big Agnes Q-Core SL is durable enough that I have no problem tossing it onto the ground around camp.

When you are looking at accessories one you might want to consider is the Big Agnes Pumphouse dry sack and pad pump.  It works very similarly to the Exped Schnozzel Pumpbag that I mentioned in my Exped SynMat UL 7 sleeping pad review.  You can store your sleeping pad or sleeping bag in it and then use it to inflate your sleeping pad when you get to camp.  Big Agnes’ version doesn’t work as well as the Exped version (due to the different types of valves used by each company) but it does save your lungs from needing to blow up your pad as well as serving double duty to store your gear (so no weight penalty).

My Big Agnes Q-Core SL sleeping pad in use at Camp Muir on Mt. Rainier. During this particular trip we encountered a lightning storm while at Ingraham Flats that dumped several inches of hail on us the night of our summit attempt. I was warm and cozy on the Q-Core all night long and ready to hike when we got a break in the weather.

The one and only gripe I have with this sleeping pad is the weight.  A claimed weight of 16 oz. is heavier than I would like to see but still reasonable if it means I sleep well.  The real issue is that when I weigh this sleeping pad I get a result of 17.18 oz.  While this isn’t way off it is enough that I am disappointed – an ounce is an ounce and I don’t like it when a company claims a product is lighter than it really is.

I wish I could use a lighter sleeping pad, like the Neo Air XLite, but due to the Big Agnes Q-Core SL’s superior comfort and R-Value I chose the Big Agnes every time I head into the backcountry – regardless of the season.

Update: There seems to be a trend of Big Agnes sleeping pads not weighing what they are advertised to.