The Emberlit Fireant stove is a collapsible, titanium, wood burning (or solid fuel) stove that weighs a scant 2.8 oz. The idea behind any wood burning stove is that you don’t need to carry fuel if you can just burn the small sticks on the ground around you. You lighten your load and can stay out in the woods indefinitely without the need to resupply your fuel – all very appealing options.  The downside though is that you are going to deal with going through a more in depth process every time you want to cook something (vs. “traditional” canister stoves). But are they, and the Fireant, worth it? Will it produce a hot meal when the sky is pouring and you are trapped in your tent for days on end? Lets find out.

First off let me say that I love the idea of a wood stove. The smell of smoke, the gentle lick of flames around a pot and the crackle of wood changing state from solid to gas then plasma and emitting heat and light as byproducts create an amazing experience (I’m a bit of a physics nerd).  I think this experience, many people’s first introduction to the outdoors, cleanses the soul.  Canister stoves steal away the magic  replacing it with convenience and weight savings, a trade I’ve gladly made for many years. But what about the Emberlit Fireant? It’s a much more technically advanced version of the classic portable wood stove used for years or maybe even centuries and the creators hope that the technical advancements are enough to carry it into the 21st century.

Personally, I’ve taken a small wood stove my grandpa made for me out of a large coffee tin on every kayaking trip I’ve gone on – it’s great for roasting up harvested oysters or grilling a freshly caught fish. With that being said the Emberlit Fireant is my first experience using an “official” backpacking wood stove. I took it out on a short trip to put it through its paces and overall I was quite pleased with the experience. This particular stove’s primary selling point is its titanium construction which drops the weight to a scant 2.8 oz. This is awesome! But, it’s also not awesome. One of the first things I noticed was how flimsy this stove is.  When fully assembled it is quite structurally sound but when it’s packed flat in its little case I made a conscious effort to make sure it was packed carefully in a location that would keep it from bending.  When you receive the stove in the mail the first thing you will need to do is remove a protective plastic film that covers the stove.  I bent one of the walls of the stove while pulling the film off. I was able to bend it back into shape pretty easily but the experience made me cautious going forward with how I treated the Fireant. 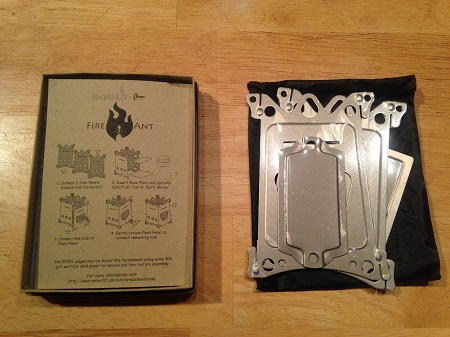 Unboxing the Fireant. You can see the plastic film covering the stove to protect it during shipping. It comes with a very nice little custom built, lightweight, storage sack that velcros closed keeping your pack free of soot.

Getting a fire going in the Fireant is a pretty easy process.  The compact nature of the unit makes even a small flame very effective as heat is contained and focused within the stove.  While you need dry wood to get the fire started (or a firestarter) you can feed very wet wood into it once the fire is going and it burns without issue drying out in moments – just make sure to feed wet or green wood into the stove while there is still some wood left to burn in order to keep the fire going while the new wood dries out.

Maintaining a fire is even easier than getting it going. This stove is extremely efficient. A small branch will keep the fire going for about 45 min. No need to worry about collecting mountains of wood to get you through the night. When you are collecting wood to burn look for branches roughly thumb sized in diameter. I found these hit the sweet spot in being small enough to easily fit into the stove but large enough to burn for a substantial length of time. As you feed the fire one thing I noticed was that small coals will sneak out the front of the stove so make sure you stay vigilant. Remember, only you can prevent forest fires. 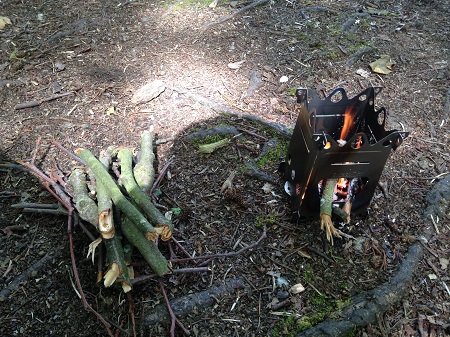 This small pile of sticks burned for roughly 45 min.

To test the cooking capabilities of the Emberlit Fireant I used an Evernew Titanium Ultralight Pasta Pot (size medium). It was very stable on the stove even during a rolling boil. Once I had a good fire going in the Fireant 16 oz. of water boiled in roughly 7 to 10 minutes. For those of you new to wood fire cooking you need to be aware that the pot you use will get covered in soot that is very hard to remove. Be sure to pack a stuff sack that is exclusively used for your cook pot – it protects everything else in your pack from getting soot stained. 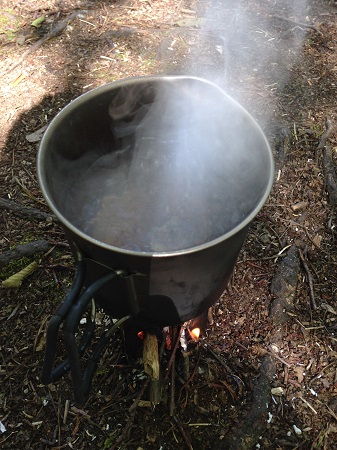 Boiling water after about 7 to 10 minutes. Be aware of the flames licking up the side of the pot – I melted a small portion of the pot handle by accident. 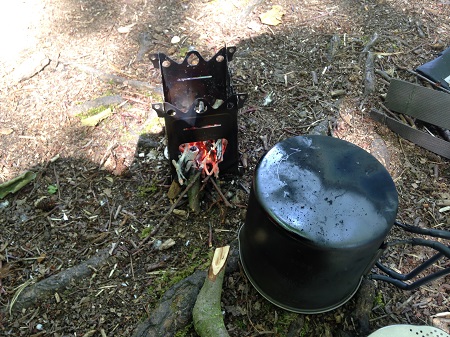 Once I was done cooking I decided to test out the “fire” option – ie. just letting it continue to burn as my campfire. This was awesome.  You can get a surprisingly sizable fire going in the Fireant that was more than satisfying to sit next to while I drank some hot tea and watched the stars come out. I’m not sure how the legality of this works though. Where I do a lot of backpacking campfires are not allowed. Can I still use the Fireant? I’m not quite sure. Its so efficient and self contained that it won’t really contribute to the destruction of high alpine environments and its much safer, in my opinion, than a traditional fire when forest fires are an issue so I can see an argument for allowing it. If I can use the Fireant as a “campfire” in areas I am traditionally not allowed to make one I’ll be pretty stoked but I still need to do some research around that (if anyone knows the answer I’d love to hear). That option alone might be enough to convince me to bring this stove along on trips even if I am already planning on packing a Jetboil to cook with. 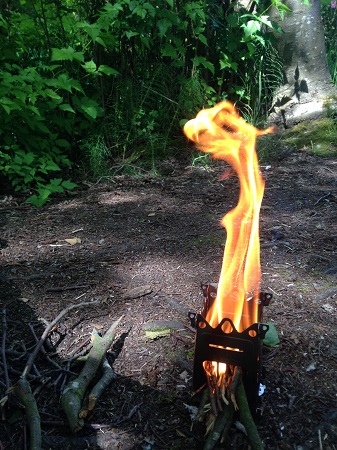 As you can see you are not limited to puny little fires in the Emberlit Fireant.

Really there are only a couple major drawbacks to this stove (and really all wood stoves for that matter). The first is that it’s far trickier to cook with when the weather is nasty. I would not want to be holled up inside my tent and trying to cook in my vestibule using the Fireant. I’ve melted holes in my fair share of tents while cooking in bad weather using “safe” canister stoves – you won’t see me using this thing anywhere near my tent. The other major drawback is the slow nature of the stove. It takes some time to get a fire going, cook your meal, put the fire out, let the stove cool, get it cleaned and finally packed away. In the evening when you are at camp this isn’t a big deal but in the morning when you are wanting some quick coffee and oatmeal before you hit the trail this is an annoyance. The final, and obvious, drawback is that if you are hiking above the treeline or possibly in a desert you will have a tough time finding fuel to power your stove. One thing I’m not really touching on in this review is the Emberlit Fireant’s ability to work with alcohol burners and solid fuel tabs. The Fireant comes with a little shelf that can be used to hold an Esbit tab for emergency situations when you can’t get a fire going using small sticks. I didn’t test out this feature but from what I can tell it seems like it would work pretty well. Solid fuel tabs or alcohol burners are options if you are above the treeline but that kind of defeats the point in my opinion.

Ultimately the Emberlit Fireant fulfills a very strange niche – it’s built for people who want to go fast and light on the trail (no need to carry your fuel) but it’s also built for people who want to slow down and enjoy the scenery when they are at camp (since you are forced to take your time cooking). If you fit into this particular audience or are just curious about wood stoves I think the Emberlit Fireant is an great solution.

UPDATE: Another interesting use case I found for this stove was cooking for large groups.  Because you don’t need to ration fuel the weight savings that comes from dropping the fuel needed to feed many people is significant. If this is how you plan on using a wood stove getting the larger version, the Emberlit – UL, which can support a large cook pot might be of interest to you.

What is the best fire starter?