Recently I picked up the Millet Axpel 42 L mountaineering backpack with high hopes for its active suspension, the MBS back system with swiveling hip belt pin.  For larger overnight packs I gravitate towards the lighter weight variety so I was interested to see what a fully featured pack with beefy suspension would be like.  I must say I was pleasantly surprised.  This is one of the most comfortable backpacks I have ever worn.

Loading this pack is super easy.  Its got a top loading main compartment with an additional zipper to access the pack through the bottom – there is also a internal main pocket separator that can split the main pocket into upper and lower sections.  I choose to leave the main pocket un-separated while testing.  Other features included on this pack are a hydration pocket, ice axe holders with elastic cinch downs and spike protection, climbing rope attachment points, a rain cover, elastic side pockets, a hip belt pocket, a ski carry system, and a small inside zippered pocket to store your wallet and keys. 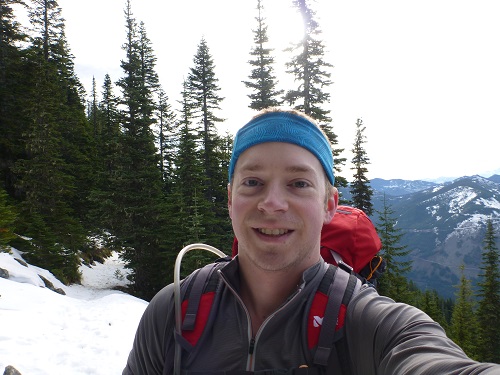 Once the pack on you bairly notice you are carrying anything.  The hip belt is super comfortable and I think Millet’s pivot system is superior to any other on the market.  Millet decided to put the pivot point higher up your back rather than directly at your waist.  The rage of controlled movement this allows your pack is a tad disconcerting at first.  Every time I moved and didn’t feel the resistance normally felt when wearing a traditional pack my instincts told me my backpack was about to fall off.   I’ve used this same suspension system on another Millet pack, the Matrix MBS 30, and have yet to be disappointed with it.  One unique thing about using a system like this is how it changes the way you adjust your pack’s straps.  Traditional backpacks are made to be locked down and come equipped with hip stabilizer straps to help with this.  When using any kind of hip belt system that is made to swivel or move (like the kind used by Black Diamond) I’ve found my pack is much more comfortable and the hip swivel is more natural when I leave my hip stabilizer straps loose.  I’m not sure if this is a universal rule but I would give it a try if you own a swiveling pack. 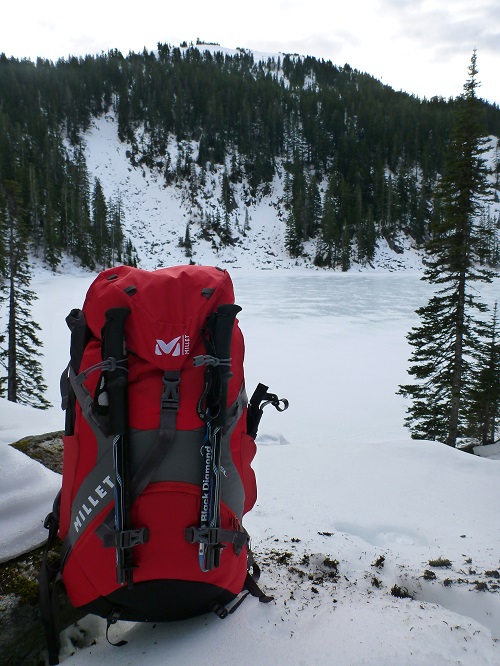 No ice axe or rope needed for this trip but the Axpel 42 carried my trekking poles like a champ.

For the most part I highly recommend the Millet Axpel 42 mountaineering backpack, but, there are some things I don’t like about it.  The first issue I have is that the head pouch doesn’t expand.  I get that this pack is made to be streamlined and that over packing it should be discouraged.  The problem though is that sometimes you are forced to carry more gear than you expected. I’ve had multiple experiences where a member of the group I was with was injured (twisted ankle or something similar) and couldn’t carry the weight of their backpack.  By splitting that party members gear up between other people we were able to continue on without too much trouble.  This pack would have a hard time accepting extra gear if you have packed it pretty full to start with.  The pack’s suspension system is so comfortable it would have no problem accepting a bit of extra weight so why not give that option?

The second, and largest issue, I have with this backpack is the ski carry system.  It doesn’t fit my backcountry skis.  In fact it barely fits my skinnier resort skis.  I’m not sure if fat skis haven’t caught on in France (where this pack comes from) or what but this isn’t the first Millet pack that I’ve had this same issue with.  The Millet Matrix MBS 30 is my favorite day trip backcountry skiing pack and my skis need to be squeezed into its carry system.  It was so tight that I ended up modifying the pack to add additional length to the straps on its carry system to more easily accommodate my skis (the rest of the pack was so awesome the effort of the modification was worth it).  The Axpel, on the other hand, doesn’t really support modifying the carry system. 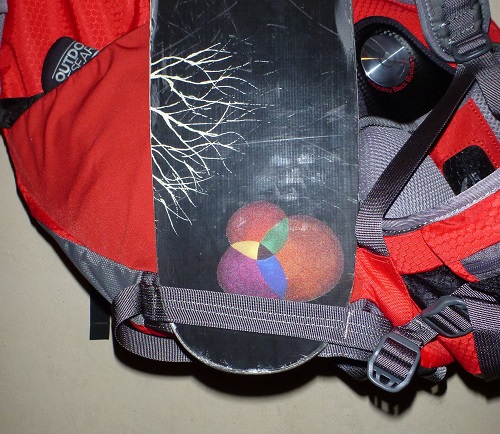 As you can see these 2011 Sir Francis Bacon skis by Line are not going to fit. They are considered to have a modest width with dimensions of 142-115-139.

All things considered I really like this pack.  If your skis fit or if you are unconcerned about carrying skis and just want an astonishingly comfortable pack for mountaineering you will be pleased with the Millet Axpel 42 backpack.