Mountain Hardware’s Summitrocket 40 backpack aims to be your go to fast and light peak bagging pack.  It is a stripped down, simple pack made from a mix of both durable and lightweight materials that hides a few surprises inside it.  Using this strategy Mountain Hardware has been able to create a pack that comes in under two pounds – with a claimed weight of 1 lb. 12 oz.

The Summitrocket 40 is an intriguing pack.  Its light enough that you won’t notice it on your back yet with a frame sheet, padded hip belt and 40 liter capacity it is capable of hauling some gear.  I looked everywhere I could to find out the recommended weight limits for this pack.  When I came up empty handed I reached out to Mountain Hardware and was told that the Summitrocket 40 is intended to carry anywhere from 10 to 30 lbs. and that you could probably push it to 35 lbs. if needed for short distances (think the approach to your final camp before a summit attempt).  You will also notice that on the official product page for this pack Mountain Hardware mentions that the Summitrocket 40 is compatible with several other, aftermarket, hip belts that can increase the load carrying capacity. 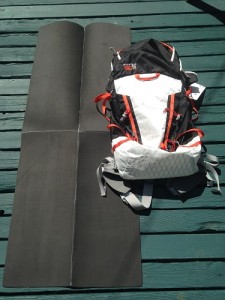 A look at the integrated sleeping pad on the Mountain Hardware Summitrocket 40.

Outside of being lightweight the Summitrocket 40 has another feature that really makes it stand out – the integrated sleeping pad.  On the outer portion of the pack between the frame sheet and the main body is a sleeve to slide a custom made 3/4 length sleeping pad.  Not only does this make carrying a full load of gear easier by freeing up space inside your pack it helps add another layer of support and padding increasing comfort.

Unfortunately this pack really didn’t hold up to my personal needs.  I loaded it with 22 lbs. of gear and could instantly feel that the very flexible frame sheet was not transferring the load very well.  I’d personally put the max weight capacity of the Summitrocket 40 at 25 lbs.  While I’m not an extreme ultralight backpacker I do carry a pretty light pack (20 – 25 lbs. on average and 35 lbs. for a full mountaineering setup including crevasse recue and climbing gear – both weights include water, food and fuel). If I’m feeling this pack’s limits the average backpacker is going to blow it out of the water.  I thought I’d try a different hip belt to see how much more weight this pack could take but it turns out that even though upgrading the hip belt is an advertised feature Mountain Hardware no longer produces any of the compatible hip belts.  Nice false advertising. 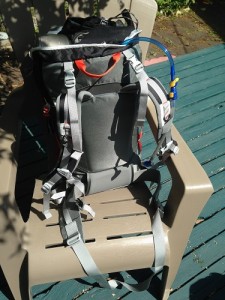 The waist belt is big enough on the Mountain Hardware Summitrocket 40 to go around at least two people.

I’m also not really pleased with the features Mountain Hardware decided to cut, modify, or include.  First is the ice axe loops.  They are not actually loops and don’t work super well.  They also did not include any type of small side pocket to allow the storage of tent poles or a snow picket on the outside of the pack. You are forced to put all your gear on the inside of the pack – if you are trying to use this pack as an approach pack and a summit pack you probably will be out of luck trying to fit everything inside it.  While skimping out on some features they also went overboard on others – especially the strap length.  Look at the waist strap, you could literally fit it around an elephant.  If you want to cut weight how about you keep my tent pole pocket and cut a foot of that waist strap.

Finally, the most irritating thing about this pack is something you’ve heard me complain about before.  It’s claimed weight is not the actual weight of the pack.  When I put this pack on my scale I get 2lbs. 4 oz.  That is a far cry from the 1lb. 12oz. claimed weight – I had to remove the hip belt, frame sheet, and sleeping pad to finally get it down to advertised.  This pack, and its flaws, become far less appealing when you realize the Summitrocket 40 isn’t really that light.

But… there is one feature that makes me want this pack.  The integrated sleeping pad is brilliant.  Even if you plan on bringing a normal inflatable pad the integrated one can add an additional layer of warmth when winter camping.  Its super easy to access even when the pack is loaded making it great to use as a sit pad at lunch.  What really makes it work well is the “hinges” built into it.  Mountain Hardware cut it in to four quarters and then stitched them back together – essentially creating some hinges that make it fit into the built in pocket without any hassle. 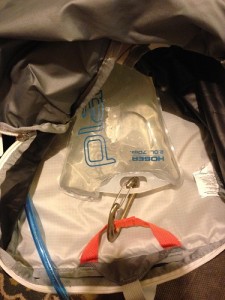 Here’s how you can hook up a hydration bladder to the Mountain Hardware Summitrocket 40.

Other features worth noting on this pack include the internal compression strap (it actually works really well) and really nice low profile shoulder straps.  Also, there isn’t a hydration pocket in this pack (although you can hang a hydration bladder from a loop on the inside and run the tube out the top zipper).

While this pack isn’t for me I’d recommend you check out the Mountain Hardware Summitrocket 40 if you are a fan of packs like the GoLite Jam, ZPacks Arc or GossamerGear Gorilla but want something that is a little more traditionally styled both in coloring and construction.