For 2014 Osprey updated their very popular Exos line of packs.  The newest update has a couple big changes – primarily squishy new shoulder and hip belt straps that promise a more comfortable ride.  There is also a cool new double lid (called the FlapJacket) that makes it easier to use the Exos with the head pouch removed. This is a pack I’ve been wanting to take a look at for a while since I have used the previous version on and off over the years due to its do-it-all versatility.  What makes the Exos line stand out is its relative light weight paired with a rock solid frame that allows you to carry a lightweight load in extreme comfort but also not hate life if you need to drop 40 lbs. into it.  I’ve always preferred the middle size of the Osprey Exos series, which is now the Exos 48, as I feel that a 40L to 50L pack makes a great weekend or (if you lean toward lightweight gear) a extended trip backpack. So how does the new Osprey Exos 48 compare to the previous Osprey Exos 46? Lets find out!

The Osprey Exos 48 is a pack that does the job it was made to do well – that job being a lightweight pack for those who travel extreme distances, What makes this pack do that job better than other packs is its ability to shoulder 35 to 40 lb. loads on the occasional long stretch of a through hike.  It achieves this through a ridged frame and an extremely solid back panel. As one of the major updates to this pack the shoulder straps and hip belt got a big overhaul to help ensure the Exos can handle the weight when needed.  Take a look at the difference between the previous and current versions. 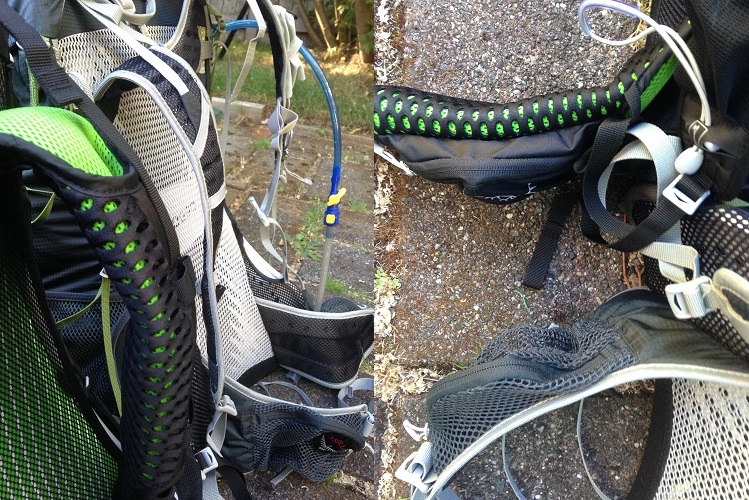 To state the obvious, the newly updated straps and hip belt are way more squishy than the old versions.  When you load the Exos 48 up with weight and try it on you can instantly tell that this pack is more comfortable than previous versions. But, after taking this pack on a hike and carrying it loaded up for 10 miles I found that the large circle texture on the straps rubbed my shoulders and caused a lot of irritation if worn over a thinner shirt.  They were also a bit bulky feeling and didn’t breath as well as the previous version.  Personally I prefer the old straps with their lower profile even if they don’t support a load as well.  Very rarely do I find myself stuffing this pack to the brim so I don’t need the extra kush of the new straps.  I also use this pack more often in the summer when I’m most likely to wear thin clothing so the irritation the new straps caused is a major road block for me.  I won’t deny though that these are some squishy straps – as long as they don’t bother you they will work great.

The other new feature added to this pack was a top pouch closure, called the FlapJacket, that secures the top of the pack when you use it without the head pouch.  This is a feature I both love and loathe. Tons of people use this pack on a regular basis without the head pouch – myself included.  Without the head pouch this feature is amazing.  It makes the top of the pack way more secure and adds a layer of waterproofing over the top rather than just leaving a hole that rain can drip into. But, when you are using the head pouch this extra flap can’t be removed.  It just sits up there adding extra weight and getting in the way.  If Osprey had made this flap removable I would be singing its praises – instead its a feature that I both enjoy and dislike at the same time. When it comes down to it though this is one of those superfluous features that really could be removed to streamline the experience. 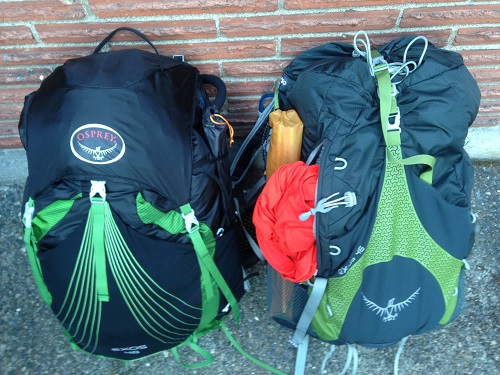 Check out two things in this picture – the FlapJacket lid on the Exos 48 (left) and the zippered pocked that was a feature of the Exos 46 (right) but was removed from the Exos 48.

The final feature that was heavily changed was the removal of a secondary zip pocket that was located behind the front stuff pocket and in front of the main pouch (you can see red fabric hanging out of this pocket in the above picture). I loved this pocket. I have a hard time organizing my pack when I use lightweight stripped down packs that have the head pouch removed. This pocket solved that issue. I, personally, stash my tent in that pocket. This lets me unpack and set up my tent without needing to dig down to the bottom of my pack. I’ve seen other people use this pocket to store jackets, headlamps, energy bars and lots of other items. I am very disappointed to see this pocket no longer included on the latest iteration of the Exos line.

Outside of these major features this pack has the traditional list of features you would expect – things like compression straps, ice axe loops, mesh side pockets, and hip belt/shoulder strap pockets. As a side note its good to point out that the majority of compression straps on this pack are removable – a nice touch for those who do a lot of alpine bushwhacking.  One feature you might not expect is a quick connect trekking pole attachment.  This is super cool but won’t work if you use poles that shrink down too short.

To be fair I need to say that I do like the Osprey Exos 48 backpack but I loved the previous version – I think the Osprey Exos 46 was a near perfect bag for what it was designed to do. That being said, if you like the look and feel of the Exos 48 go buy it. It’s a great backpack at a reasonable price that will keep you on the trail for years to come. But if you already have the Exos 46 there is no reason to upgrade to the new version.