The selection of backpacker meals on the market has exploded lately. Options abound for not only those sick of the traditional Mountain House meal but also for those with dietary restrictions. Case in point Paleo Meals To Go. Produced by an outdoor enthusiast and his mother, they are aimed at anyone who wants to eat paleo while on an outdoor adventure.

These meals are awesome. They are gluten free, grain free, milk free, and soy free. Not only are they paleo friendly but for people with milk allergies (like myself) they are great! A majority of freeze dried meals sneak whey into the ingredient list when you wouldn’t expect it and I’ve been tricked on more than one occasion. Even though I’m not a paleo person I love that they cater to a wider variety of dietary needs. 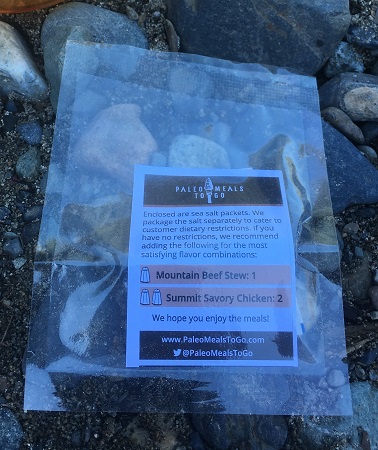 Paleo Meals To Go even considers people with salt sensitivity by allowing you to add as much or as little salt as you would like.

Freeze dried to perfection! Even in it’s pre-cooked state Paleo Meals To Go look like real food. More than can be said for some of their competitors.

Not only does Paleo Meals to Go make dinner options but also great breakfast choices as well. The Cliffside Coconut Berry is my hands down favorite. Paleo breakfast options that are not in bar form was something I think the industry really needed and I’m happy Paleo Meals To Go filled that niche. Fig based bars are fine for a day or two but after a week in the woods they really start to stick in your throat and mixing things up is greatly appreciated. 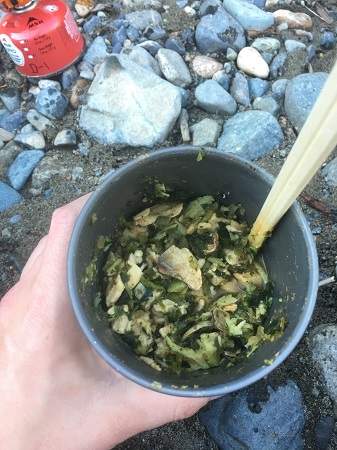 I can actually identify all the things I’m seeing! Chicken! Kale! Broccoli! It tastes as good as it looks.

My favorite way to use these meals is to augment them with Top Raman, orzo or mashed potatoes. I’m not a paleo person so I’m happy to eat non-paleo options but the quality of ingredients in many traditional backpacking meals leaves a lot to be desired. If I add two packs of Top Raman to one of these meals it’s a delightful dinner that is more than big enough for two people. Even the meal on it’s own, while they say each pouch is one serving, was more than enough for just me and almost enough for two servings – augmenting this with some Top Raman makes a solid two person entre.

Paleo Meals To Go are one of the best backpacking freeze dried meal options on the market without question.

NOTE: I received several sample meals free of charge from Paleo Meals To Go in consideration for a gear review.

The importance of delicious food in the backcountry.