The Snow Peak Mola headlamp is a very unique headlamp offering that, while providing an interesting look into what could possibly be future headlamp tech, doesn’t quite feel like a finished product with the level of quality I expect from Snow Peak.  On the surface the Mola is a run of the mill 110 lumen headlamp.  Its unregulated, takes two AAA batteries, isn’t water proof, and uses a single top button to cycle though its various brightness settings (dimmable down to 10 lumens as well as a strobe setting).  What sets this headlamp apart is its unique lens design that allows it to follow your eyes to always be pointing where you are looking.

Now you might think: don’t all headlamps do this? I point my head and the headlamp points the same direction.  While that is true there are some subtleties that the Mola tries to over come.  Situations like looking down at a map and then up at a trail sign.  When you look down at a map you don’t tilt your entire head 90 degrees and look directly down.  You tilt your head about 45 degrees down and then move your eyes down the rest of the way.  The Mola compensates for this by rotating the lens of the headlamp down another few degrees so that it is pointing the same direction as your eyes to project directly where your eyes are looking. The Mola essentially takes cues from the angle of your head and exaggerates that angle to point the light where your eyes are looking.

In practice this works moderately well.  I look down at what I’m holding and the headlamp points at it.  I look up at something far away and the headlamp points at it.  But, there are a few times it pointed the exact opposite direction I wanted it too.  There is a odd middle ground roughly 15 feet in front of me at a downward angle (pretty much the spot ahead of me on the trail that I look at while I hike) that makes the headlamp freak out.  It either points way too high up or it points down like I’m trying to read a map.  This is pretty irritating.  I also found I had to wear this headlamp a little lower down on my forehead than I like to in order to have it swivel correctly.  Overall this is an interesting feature and one that I’ll be curious to keep an eye on as they continue development of it but right now its not a mature enough technology to really work effectively.

The other thing that really surprised me about this headlamp was the overall production quality.  It feels cheap in your hands.  To lock the swivel feature you pull out on this little plastic knob (or push it in to enable the swivel).  Every time I lock/unlock it I feel like the knob is going to pop off.  I also don’t think I could successfully engage/disengage the lock if my hands were wet and cold.  Pulling the knob out also isn’t very intuitive as it also rotates to adjust the angle of the headlamp when its locked. 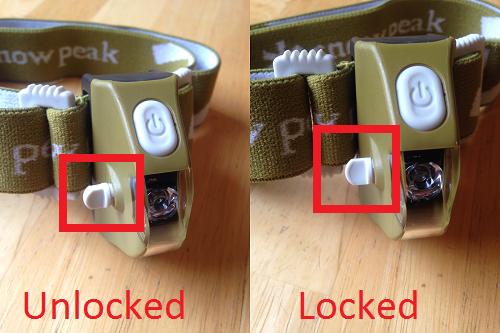 Turning the headlamp on was also strange.  You hold down the one and only button until the headlamp’s main LED flashes then release it.  After releasing the button the light turns on.  I initially though I had received a broken headlamp that didn’t work until I read the manual and learned how to turn it on.  If I picked up this headlamp without the manual I wouldn’t have known how to work it.

This headlamp is essentially a gimmick.  Its fun to play with but I couldn’t in good conscious recommend it for any type of serious (or even semi serious) outdoor activity.  With it retailing at $59.99 (the same cost as my all time favorite headlamp – the Black Diamond Storm) I doubt the Snow Peak Mola headlamp will see much use.