The importance of delicious food in the backcountry.

Nothing makes or breaks a trip into the backcountry like the food you eat. Let’s put aside for a moment the nutritional importance of keeping your body fueled and focus on the moral food provides. As Napoleon said “An army marches on its stomach”.

Just like napoleon’s army, when I’m in the wilderness I march on my stomach. When I’m exhausted at the end of a long day slogging through the bush in a miserable rain the last thing I want to do is choke down a partially rehydrated Mountain House meal. On the flip side, at the end of an awesome day of crushing miles and amazing views I don’t want to celebrate with a chalky Cliff Builder’s Bar that gets stuck half way down my throat.  Lately I’ve seen several other blog sites discussing the nutritional value of food brought backpacking but I’ve not seen anything discussing the other aspect food brings to a trip.  The boost in morale that a hood meal provides something that you can’t forget.

But, I’m getting ahead of my self. A year ago I was an average backpacker. I filled my bag with a mountain house meal for each night and a collection of cliff bars for lunch – food variety meant packing different flavored of each. Last year during a summit of Mt. Rainier my philosophy changed. I was in a tent on Ingraham Flats and was, literally, in the middle of a lighting storm. The thunder clouds were literally surrounding our tents – we were consumed by the storm. As lighting struck the ground around us and hail the size of marbles fell thick my buddy and I came to grips with the fact that the possibility of our deaths was not only high but out of our control. While we sat there and waited to see what fate would deal us he yelled out over the storm “What are you doing?!”.  I yelled back “I’m eating a Snickers!”.  The response I got back over the wind was “OK! I’m going to eat one too!”.  We would later dub those Snickers bars “fear Snickers”.  I was possibly eating my last meal on the face of the earth. Did I want some high nutrient super food paste that kept my body going but tasted terrible? No. I wanted my last meal to be a Snickers.

Since then I’ve made it a point to bring real, delicious, food with me when I go backpacking.  Striking the right balance between food that doesn’t weigh you down too much but tastes delicious and still provides you the energy needed to exert yourself physical is tough but it can be done.  The first thing I did was evaluate the food I brought with me that ended up being the last things I ate after all the good stuff was gone.  This ended up being pretty much anything freeze dried and energy bars.

So what to replace them with.  Energy bars have been replaced with a combination of things.  The point of eating a Cliff Builder’s bar was that it provided carbs for quick energy and protein for lasting energy.  I’ve replaced them with apples for energy (an amazing trail food packed with easily absorbed sugars and due to their hard nature can be knocked around in your pack without worry – the first time you bite into a crisp juicy apple when you are exhausted, hungry and thirsty is something you won’t forget) and either string cheese or salami for protein.  Other trail snacks I eat consist of Snickers bars (which have a pretty decent nutritional value for a candy bar), traditional trail mix (which I augment with extra dried fruit such as cherries and extra M&M’s), gummy bears (which actually have about 3g of protein per serving), dehydrated fruit (I try and find mangos), beef jerky and peanut M&M’s.  At lunchtime I eat a piece of pita bread filled with tuna salad (you can find pre mixed tuna salad packets at the grocery store).  For dinner I’ll boil angle hair pasta (the fastest cooking pasta I have found) along with dehydrated mushrooms and beef jerky (boiled jerky rehydrates quite nicely).  After draining most of the water I’ll mix in a gravy packet along with parmesan cheese and have a delicious beef stroganoff.  You can also substitute a spaghetti sauce packet or even tuna to mix things up.  Another good backcountry meal is made by boiling up dried mushrooms, dried tofu (found at most Asian supermarkets), a beef pho soup packet, dried seaweed and dried rice noodles.  For a dinner appetizer I bring several carrots.  Like apples they have an awesome crunch when you bite into them and they can be tossed into your pack without worrying about them being damaged.  Its amazing how much I crave fresh vegetables after a few days on the trail. 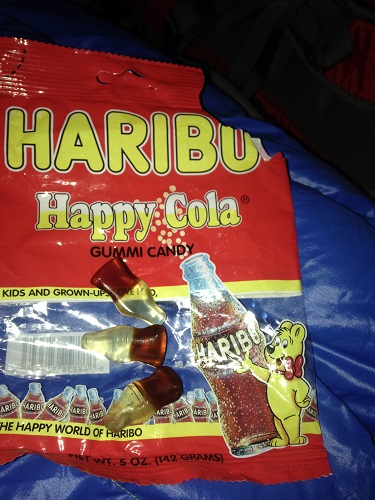 I love me some Happy Cola tummies. Nothing like a little comfort food that reminds you of your childhood while a storm rages outside.

Another thing to always remember is desert! A hard day pounding down the trail means you need to reward yourself.  There are easy things like a few squares of a nice chocolate or other candy.  If you want something more adventurous take one of your apples and cut it into slices removing the core.  Next sprinkle it with a mixture of cinnamon and sugar, wrap it up tight with tinfoil and place it in the coals of your fire for about an hour.  When its soft to the touch you will have an awesome hot apple pie like desert.

What you will notice is that everything I’m eating is made up of real food.  Some people will complain that eating this way takes longer – which is true.  But I challenge you to think back to some of your favorite backpacking memories.  How many of them revolve around a fire, good food and good friends? What is a couple extra minutes of meal prep when this time can turn into some of the best parts of the trip.  This becomes especially important when you are introducing new backpackers to the outdoors.  Making sure the initial experiences someone has in the backcountry are positive can mean the difference between someone who thinks you are crazy for doing what you do or creating a new outdoor adventure buddy.

Interested in eating better? Check out the newly released book by Backpacker Magazine – BACKPACKER’s Best Recipes: Lunch & Dinner: 110 Delicious Meals for the Trail.  It has tons of excellent recipes that you can tailor to your specific tastes which focus on eating delicious (and nutritious) food.