Lets get this out of the way first: I love hammocks.  Taking off your hiking boots and kicking back in a hammock after a long hike is the epitome of backcountry luxury in my mind.  I’ve been overnighting in hammocks, when the terrain allows, since 2004 but I’ve never used a “fancy” hammock.  Up until now I’ve used minimalist hammocks, like the Hummingbird.  My attitude has always been that they work and are lightweight so why change.  Well, let me tell you why.  A little while ago I went hammock camping and woke up in the morning with about 30 mosquito bites on my face – the only skin I had left exposed overnight.  This led me to search for a bug proof hammock option.  Enter the Warbonnet Blackbird Hammock.  A lightweight yet luxurious hammock that promises to provide a bug free experience.  Sign me up! 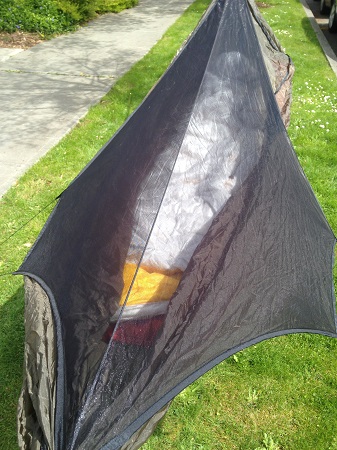 You can see, in this backyard setup picture, the two “wings” the Warbonnet Blackbird has. This is created when you guy out the two attachment points. Not only does it keep the bug netting out of your face but it also create that awesome shelf (the right side wing). You can also see the footbox poking out on the far end of the right side as well

The Warbonnet Blackbird Hammock boasts a large set of features.  The primary ones being: a full length side zipper, storage shelf, footbox and elastic side guy lines (not to mention the whole bug net thing…).  You are also given the choice of two suspension options – webbing and buckles or whoopies with tree straps.  I decided to go with the webbing and buckles (personally I don’t think it really matters which setup you go with – webbing seemed like an easier setup option which is why I choose it). Setup is fairly similar to any other hammock and Warbonnet has some great instructional videos online to help you if you are confused. The major difference between setting this hammock up and traditional hammocks is the configuration of the elastic guy lines.  They are intended to pull the netting out and support the shelf.  They achieve this purpose well but make it kind of a pain in the butt to get into the hammock.  I generally tended to set up the guy line which supports the shelf and forgo the one on the other side.  This caused the netting to drape a little closer to my face then I liked but made entry/exiting much easier.

Speaking of the shelf.  IT IS AWESOME.  It holds a ton of stuff.  I was able to stick a pair of shoes, headlamp, snack, bear mace, light jacket and gloves in the shelf for quick overnight access.  This is my favorite feature of this hammock.  I’ve never seen anything like it and think its just amazing.  I love the little side pockets built into tents and this is essentially the same thing for a hammock.

The other feature that is touted on the Warbonnet Blackbird is its footbox.  Reading other reviews online people seem to rave about this feature but I was not a fan.  The point of the footbox is to allow you to lay at a slight angle – this gives you a less U shaped sleeping surface and allows you to stretch out a bit more.  I could never get this to work.  No matter how I angled myself, with or without an air pad in the hammock, I couldn’t get it to work.  I also think laying traditionally in a hammock is very comfortable and I sleep quite well in that position so maybe I’m biased. Not going to lie though – I was disappointed I didn’t get more value out of the footbox.

All in all I think this is a nice hammock.  The construction is solid and it functions as all hammocks should.  Will this be my go to hammock? I’m not sure.  If I’m expecting bugs I’ll bring it along with me as my tent replacement but otherwise I’m not sure I can justify the 1 pound 5 ounce weight over my 5.3 ounce Hummingbird hammock.  Adding an entire pound of back weight in exchange for bug netting seems like a big sacrifice to me. The Blackbird is also priced $100 more than the Hummingbird. 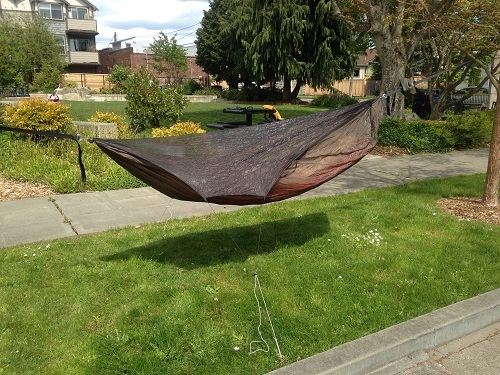 Another “backyard setup” picture for your enjoyment.

As a side note – you can set up the Blackbird as a bivy on the ground.  It works… but I wouldn’t recommend it.  If you are going somewhere that you think might not be able to support a hammock your best bet is to just to suck it up and bring a tent.

The Warbonnet Blackbird Hammock is a nice fully featured hammock.  It is a bit pricy and also a bit heavy but if you are looking for a luxurious sleeping experience that still weighs less than a tent this could be a good option.

NOTE: I purchased the Blackbird 1.1 Single Layer version with webbing/buckles.